Chet ‘White Boy Summer’ Hanks And His Ex-Girlfriend Get Into A Physical Altercation… Left Him Leaking!

This How It Is In Atlanta How ATL Plug Don t Know Nothing About Their Own Weed!

They Built Different In Russia: They Found An Entirely Different Use For Arm Wrestling Tables! 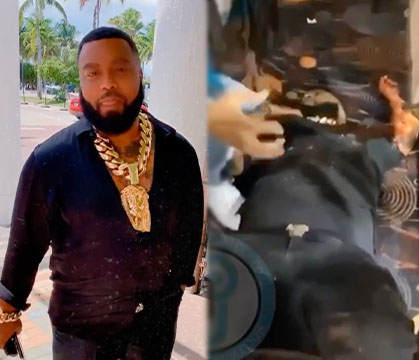 Chet Hanks and an ex-girlfriend are at war over a volatile relationship that recently ended -- with both of them slinging allegations of violence, and there's video of a bloodied Hanks.

TMZ has obtained video of what Chet says is the end of an altercation between him and his ex, Kiana Parker, that turned violent back on January 8 at Chet's place in Sugarland, TX. Chet turns the camera on Kiana when she appears to swipe at him as she holds a pot, with a bloodied Chet reappearing in the next frame, saying she charged at him with the knife ... something Kiana denies.

Chet's not the only one to claim violence ... Kiana got a restraining order against Chet in January, alleging he roughed her up on multiple occasions between Oct. 2020 and Jan. 2021.

During one incident, while the couple was in New Orleans for Chet to shoot "Your Honor," Kiana claims he became enraged when she said she was going to leave their room at the Windsor Court hotel to get food ... grabbing her wrists and arms and flinging her around to keep her in the room. Chet denies the allegations and says he never even knew she went to court for a TRO.
Credit: via TMZ https://www.tmz.com/2021/03/31/chet-hanks-ex-girlfriend-domestic-violence-restraining-order-countersue/
Posted by JR