He Wasn’t Playing: 62-Year-Old Pulls Out A Gun On His Coworker After Laying A Body Bag Down For Not Paying His Dues! 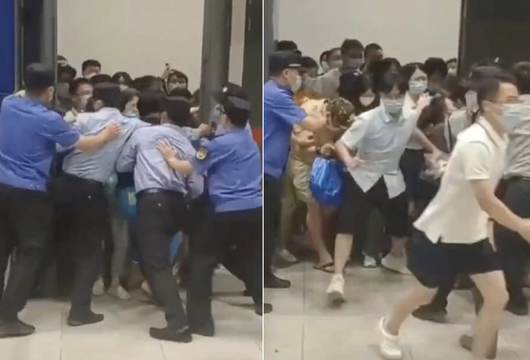 Chaos: Ikea Shoppers In China Push Their Way Out The Store After Security/Staff Tried To Lock Them In Over COVID Alert!
BROKEN? 165,847 views
Uploaded August 04, 2022

Bonneville County Sheriff’s Deputies arrested 62-year-old Bret Holdeman for Aggravated Assault yesterday (May 30) after pulling a gun on another man. At around 2pm, Deputies were called to a residence near 45th E. and 65th S. to a report that the victim was approached by Holdeman who pulled out a gun and pointed it at him. Deputies were advised the victim and Mr. Holdeman had been in a dispute over use of an outbuilding on the property that provoked a confrontation. Holdeman then pulled a handgun from his coat pocket and an altercation between the two ensued.

The victim was able to wrestle the gun away from Mr. Holdeman and flee on foot to a nearby residence where he called 911. After Deputies arrived, they detained Mr. Holdeman without incident and contacted the victim who provided cell phone video of the interaction. In the video, Deputies could see Mr. Holdeman pull a handgun from his pocket and make statements that he was going to kill the victim. Deputies transported Mr. Holdeman to the Bonneville County Jail where he was booked for Aggravated Assault. No shots were fired, and no one was injured in the incident.
Posted by CZ